Stephen Marley lyrics in his new album Mind Control released in March 2007 is taking reggae music to new heights. The 34 year old rastafarian son of Bob and Rita Marley will have to get used to the glare of the spotlight. He has been performing since the age of seven when he took the stage with brother  Ziggy and sisters Sharon and Cedella. The Melody Makers earned three Grammy Awards in their 14 years together and rasta Stephen wrote many of their songs. Musicians Stephen Marley has worked with include Talking Heads, Keith Richards, Bunny Wailer, Spearhead, Buju Banton, Eve, Capleton and Erykah Badu.

Although his mother Rita stands firm as the family’s matriarch, in recent years Stephen Marley has been appointed the unofficial head of the Marley clan an honor once bestowed on his brother Ziggy, Bob Marley’s first born son. Despite his privileged upbringing he has a ragamuffin style reminiscent of his famous father who came of age in Kingston’s trenchtown.

Mind Control boasts reggae, dancehall, triphop, Rythmn and Blues, rap and Latin rhythms. Yes there are racist cops, bad breakups, and lonely avenues, but there’s also dancing with a pretty girl, singing lullabies to your children and just “hanging out” with your friends and making human beat-box noises.

Music critics often compare Stephen to his famous Rastafarian father, noting his locks, the way in which he performs a song and his workaholic tendencies, and a charisma that appeals to the same cross section of people that made his father a legend.

When asked how he juggles his busy life between Jamaica and Miami, he pauses “You know every day is a perfect day because of the almighty, I love my work and my life. I feel I’m bringing my world to the people”
Buy Stephen Marley ‘Mind Control’ Album 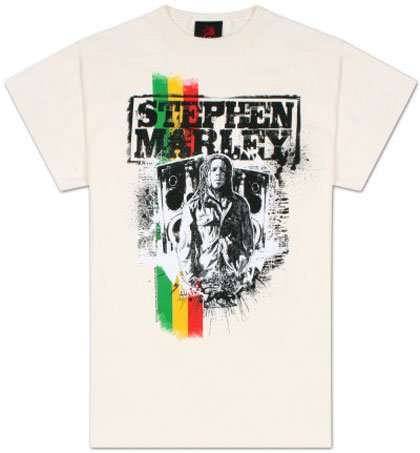