Lion of Judah in the Rastafarian livity is the emblem or symbol of Ras Tafari, otherwise known as former Ethiopian Emperor Haile Selassie. According to Rastafarian way, Selassie was the Messiah, the second coming of Christ referenced in the Book of Revelation: 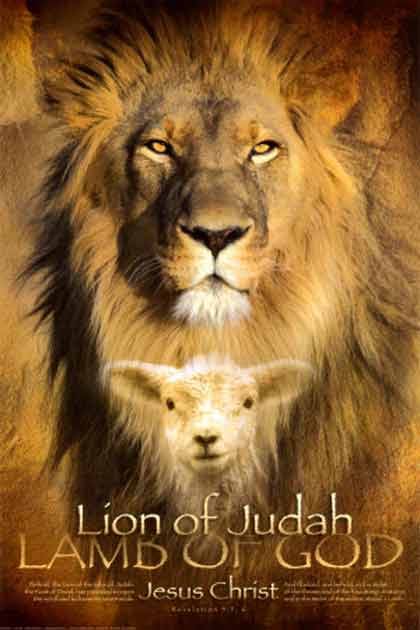 Taken from the heraldic symbol of the biblical Tribe of Judah (from which Selassie is believed to have descended), the lion represents to Rastafarians Selassie as the “King of Kings,” as the lion is King; representing the lineage of the King from the Tribes of Israel. The emblem was once worn by the Emperor as a signet.

The standard carried in the lion’s mouth is the flag of Ethiopia, the crown that of the Emperor.

“Prince shall come out of Egypt, and Ethiopia shall soon stretch out her hand unto JAH” (psalm 68.vrs:31)

“And one of the elder said unto me, weep not, behold the LION of the tribe of judah, the root of king David hath prevailed to open the book and to loose the seven seals thereof” (rev. 5 ver:5).

Rastafarians accept some portions of the Hebrew and Christian bibles- an edited Bible, the “Holy Piby,” written in 1913, is often cited as the Rastafarian scripture. The Kebra Negast, a book purporting to outline the lineage of Kings from Solomon, is also important in establishing the lineage of Emperor Selassie.

Rastas avoid what they view as the materialistic and corrupt (white) culture, which is called “Babylon,” a world of illusion similar to the Buddhist concept of Maya. Rastafarian theology emphasises individual apprehension of God (called Jah), and one who is “dread,” that is, God-fearing, an approach to spirituality that is referred to theologically as theosis, or God-becoming.

Rastas have also adopted a form of the Hindu belief in Avatars, holding that Haile Selassie was the last of four incarnations of God which includes Moses, the Hebrew Prophet Elija, and Jesus. Ras Tafari (Selassie) is believed to come from the unbroken line of Kings going back to the biblical Solomon, and is widely perceived as the second coming of Christ.

Rasta faithful revere Ganja (marijuana) as a sacrament that aids in the discovery of the “I in I,” the true form/will of Jah. Followers are expected to live as pure a lifestyle as possible, avoiding vice an materialistic desires.

Among the prophecies is the expected exodus known as “Back to Africa,” when Jah will give the signal for Rastafarians to ‘return’ to Ethiopia. there are three sects of Rastafarianism: Bobo Shanti (a seperatist order who ahere to Old Testament law), (the oldest sect, named for Queen Nyahbinghi of Uganda), and Twelve Tribes, who believe themselves descendents of the twelve tribes of David.

Knowing that material and spiritual progress are essential to man, we must ceaselessly work for the equal attainment of both. Only then shall We be able to acquire that absolute inner-calm, so necessary to our well-being. Whenever conflict arises between material and spiritual values, the conscience plays an important role and anyone who suffers from a guilty conscience is never really free from this problem until he makes peace with himself and his conscience. Discipline of the mind is the basic ingredient of genuine morality and therefore spiritual strength. Spiritual power is the eternal guide, in this life and the life after, for man can reach the summit destined for him by the Great Creator. Since nobody can interfere in the realm of God we should tolerate and live side by side with people of different faiths, In the mystic tradition of the different religions we have a remarkable Unity of Spirit. Whatever religion they may profess, they are Spiritual Kinsmen. While the different religions in their historic forms bind us to limited groups and militate against the development of loyalty to the world community, the Mystics have already stood for the fellowship of humanity … in harmony with the spirit of the mystics of ages gone by. No one should question the faith of others, for no human being can judge the ways of God.

With the raising of all men to their rightful dignity and honor as individuals, they will be able to regard their fellows, of whatever nation, of whatever race, of whatever religious, linguistic or historic tradition, as equals, without jealousy, without fear fear, without undue pride.

Until bigotry and prejudice and malicious and inhuman self interest have been replaced by understanding and tolerance and good-will..

Metaphysical Interpretations of the Bible

Courage, fearlessness, initiative, life.We must have the courage to enter fearlessly into the overcoming life and into the understanding of things.But courage alone will not do.We must have reverence of spiritual things, a devotional attitude-in order to receive spiritual inspiration. The phrase, of the Tribe of Judah bespeaks this reverential nature attitude. Jesus Christ purified his substances and his life and lifted them up until his life became a pure stream of divine life to cleanse us. The 4th Chapter of Revelation reveals the full inner meaning of the atonement of Jesus Christ’s redeeming work on earth. If we understand it fully we shall understand the inner working of the divine principal in its redeeming work in our whole being. The real spiritual life in race consciousness has been disregarded put out of substance, so this lamb of God- the original pure life and substance appears to e slain in so far as the animal consciousness of man is concerned. But to our awakened and illuminated thoughts, activities and faculties it is the lion that is of the Tribe of Judah, a source of new life and substance, which we continually worship praise and love until we realize this new all conquering life more and more fully and perfectly. The Root of David has reference to the love quality in its original purity.This is needed also. We must be rooted in love. The Lions of Daniel 6 10 23 represent the savage thoughts that arise in us when we are accused wrongfully and know that we are innocent.

4 thoughts on “Rasta Lion of Judah”