Bob Marley
Born: February 6th, 1945 Jamaica
Died: May 11th, 1981
Bob Marley is a legend, from Israel to Hawaii, Australia to Japan, Africa to Arizona, the iron lion of zion, Robert Nesta Marley and what he represented has been immortalised in a world awakening to the urgent message in his prophetic music. Even though he died twenty seven years ago.
Bob Marley’s image represents freedom. Indigenous cultures throughout the world relate to his music, the humility and the gentleness of his melodies and lyrics, as well as the rude boy rebellion and outrage of injustice that permeates his brilliant music.
The Maoris in New Zealand, the refugees in Africa, freedom fighters in Central America and Tibetans fighting for freedom in the caves of the Himalayas. They all respond to Bob Marley’s message and are uplifted by his music.
The power of this music to heal and soothe people with it’s heart beat rythmns is evident in shopping malls, elevators, nightclubs,catwalks,public transport, television, radio and now most powerfully of all the internet.
As Haile Selassie said in 1962:

No development in the modern world has been so startling as the revolution in communications. Mans voice flashes around the earth in split seconds. Distance & time have been annihilated. Our peoples vigour & labor can bear fruit only when communications networks are afforded them.

Well the communication networks are here, the internet has levelled the playing field and the wild fire has begun.


Reggae music and the way of life represented by the Rastafarian ideals is strategically suited today to carry a cross cultural spiritual message that can unify the world around a respect for the planet and the plight it and humanity is in.

Bob Marley had an urgent message. Find our rythmn again, taking the time to stop and reflect on the beauty that surrounds us. An eradication of the brainwashing of fear permeating our lives. Moving away from the material to the spiritual and getting back in touch with nature and the earth, sowing and reaping our own food, saving our own seeds and finding solace from the rythmn of sound and dance.

We are all free and equal in the eyes of Jah. We live in an abundant Universe that cannot be owned.

A few weeks before he was assassinated, Mahatma Ghandi handed his grandson a talisman on which he had engraved The Seven Blunders out of which grows the violence that plagues our present world.

It is comforting to know that Bob Marley’s legacy lives on in his children. Damien Marley, Ziggy Marley and Stephen Marley are all extremely talented musicians with compelling and highly acclaimed music of their own.
Rita Marley has claimed thirty five grandchildren.
As another Bob Marley Birthday Anniversary rolls around again, the movement of Jah People is alive and growing bigger every day honouring Bob Marley and his fire light of rights and truth, liberation and love.

To the brilliant musicians that played with Bob and are still entertaining the people worldwide, today, we say thank you for the sacrifices you have made to keep bringing this rebel sound to the people. Aston Familyman Barrett, Junior Marvin, Bunny Wailer, Al Anderson and Tyrone Downie.

Some famous songs by Bob Marley include, Three Little Birds, Africa Unite, Could this be Love, No women No Cry, Waiting in Vain, Redemption Song, I love your Way, Kaya, Don’t Worry, One Love 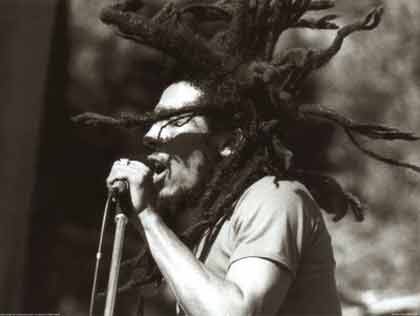