The Ankh – Key of Livity or Original Cross

In Ancient Kemet (the land of the black) later renamed Egypt by the Greeks, the ankh was known as the symbol of life and fertility, both to give and sustain, as well as the afterlife. The ankh has also been associated with material things such as water, air, sun and also the gods and kings. Ancient Egyptian Kings were seen holding and being given ankhs. The ankh amulet was worn to extend the life of the living and placed on a mummy to energise the resurrected spirit.

As a talisman the ankh is a powerful protection symbol from the forces of decay and destruction and acts as a conduit for the divine unseen power of the universe.The loop of the ankh represents the womb and the elongated section the penis. The unification of which brings life.

The loop can also represent eternal life and the cross below the material plane. Looking like a key it is said to be the key to eternal life after death. The ankh is often set in the same category as the Girdle of Isis, as a symbol of eternity. This is not because its straight lines may be lengthened in the imagination to infinity, but because they converge upon and meet in a closed loop. This loop symbolizes the inexhaustible essence of the life force identified with isis, from whom life flows in all its forms. it is therefore carried by all those who wish to share her life. Hence the ankh may be identified with the Tree of Life, with its trunk and foliage. 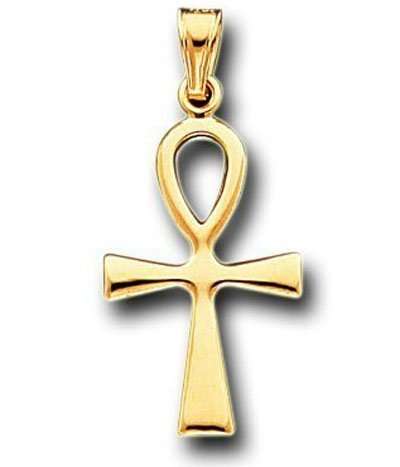 The symbol of the millions of years of the life to come. The loop is the perfect symbol of what has neither beginning nor end and stands for the soul which is eternal because it has sprung from the spiritual essence of the gods. The cross represents the state of trance in which the neophyte struggled, or, more precisely, the state of death, the crucifixion of the chosen victim, and in some temples the priests used to lay the neophyte on a bed shaped like the cross… The possessor of the geometric key to the hidden mysteries, of which the symbol was this very looped cross, was able to open the gates of the Kingdom of the Dead and penetrate the hidden meaning of eternal life. 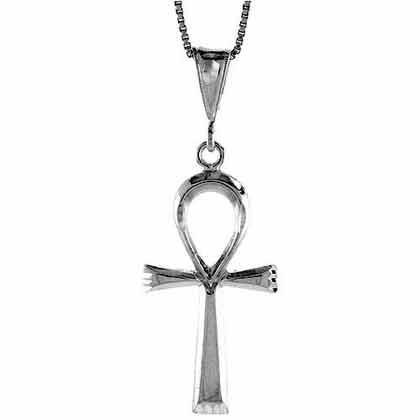 Sterling Silver Large Ankh Cross Pendant, Very Well Made and it comes with an 18″ Sterling Silver Box Chain. It measures about 1 5/16″ (33mm) Tall not including the bail.

Browse other gifts from Zazzle.