MRSA or Methicillin-resistant Staphylococcus aureus is becoming a big problem

MRSA has resulted from over prescription and irresponsible use of antibiotics. We have always known that resistance could  be a problem and now it is.  If you could avoid having to resort to this kind of aggressive treatment it would be a wonderful thing.  If you area already sick it is hard on the body and lowers immunity. What alternatives are we going to have in the future. Bidens pilosa is  very interesting. It will kill Staphylococcus aureus, so it might kill Methicillin-resistant Staphylococcus aureus. It grows everywhere and just bathing the sore in sunlight with a tea made from the leaves is all you need to do.  It doesn’t cost anything, it is easy, it doesn’t sting. I healed a small Staphylococcus aureus infection this way in two days.
Family: Asteraceae

In all the time that I have been a gardener, there are certain weeds that really took some effort to control. Farmers friends was one of those weeds, taking only a few weeks to go to seed and then spreading like wild fire.Little patches would spring up in out of the way places and be missed and then they would seed the whole place.Once they had seeded the little seeds would stick all over your clothing and go from yard to yard, farm to farm.I often wondered why they called them Farmers Friends but at last I know why.

Having read in a Chinese Newspaper in 2006, about the uses of Bidens pilosa in treating Cancer I became intrigued and began to do some research and a few experiments of my own.I read somewhere that whatever the active ingredient in Bidens pilosa was that healed infections, it was activated by sunlight, so I decided to give it a go.My friend had a terrible infection on her arm, it was not healing and she had tried all her home remedies, golden seal, turmeric, ginger. To her anti-biotics was a dirty word, not only for the cost in money but also in the cost for her intestinal tract, creating an imbalance that would take months to rectify and so she was trying everything else first. One day I was sitting in her garden and we picked a handful of this weed, that incidentally grows in just about every garden.We made a tea and let it sit and cool down, then we washed and bathed the wound in sunlight.I left her and a few months later when I saw her it had healed. I then tried it on my own nasty infection,I felt sure it required a doctors attention.I found a patch,picked a handful of leaves and poured boiling water over them.Left them to cool and bathed the infection in the sunlight for a while.Within an hour it looked different, two days later it was gone.

A single plant can produce up to 6000 seeds, permitting three or four generations a year in some regions.Its native range is temperate and tropical American, but it was introduced to the Pacific and parts ofAsia.

Erect annual or perennial herb , branching habit to one metre.Individual flowers are yellow but are tiny and held in dense terminal clusters in a widely flowering branching flowering head.Each flower cluster has four or five short, broad white petals but these drop off.  Seeds are black, about 1 cm long with 2 or 3 barbed awns at the tip.Hence they stick to clothing animals etc and spread rapidly.

It is a weed in both field and plantation crops and is reported as troublesome in about thirty crops in more than forty countries.It is considered one of the most noxious annual weeds in East Africa.

In Africa it is reportedly used as a vegetable or potherb. Fresh or dried tender shoots and young leaves are used as a leaf vegetable when food is scarce.It is also added to sauces.The leaves are also dried in the sun, stored as a powder and used in the dry season.In Uganda the leaves are boiled in sour milk. 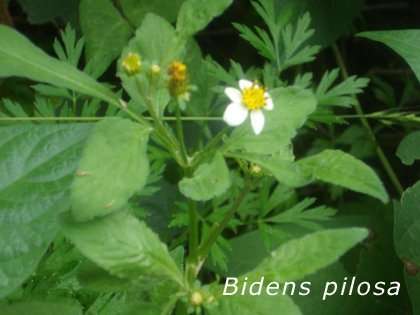 Bidens pilosa is common plant used as a medicine in many regions of Africa, Asia and tropical America. Roots, leaves and seed have been reported to possess antibacterial, antidysenteric, anti-inflammatory, antimicrobial, antimalarial, diuretic, hepato-protective and hypotensive activities. In Uganda, five different medicinal uses are known: the sap from crushed leaves is used to speed up clotting of blood in fresh wounds; a leaf decoction is used for treating headache; sap from the plant is put in the ear to treat ear infection; a decoction of leaf powder is used to treat kidney problems; and a herbal tea made from the plant decreases flatulence. Extracts of Bidens pilosa are used in southern Africa to cure malaria. The Manyika people in the eastern highlands of Zimbabwe retain the first water used for cooking Bidens pilosa foliage for later use as a medicinal drink to cure stomach and mouth ulcers, diarrhoea, headaches and hangover. The Zulu in South Africa use a suspension of powdered leaves as an enema for abdominal trouble, whereas in Congo a concoction made from the whole plant is taken as a poison antidote, or to ease child delivery and to relieve the pain from hernia. In South Africa, strong decoctions of the leaf taken in large doses have been reported to be helpful in treating arthritis. In C0te dIvoire, the plant is used for treating jaundice and dysentery. The plant sap is applied to burns in Tanzania. In Nigeria, the powder or ash from the seed is used as a local anaesthetic and rubbed into cuts. The Giriama tribe from the coastal areas of Kenya use a leaf extract to treat swollen spleens in children. This tribe also uses a mixture of the dried and ground leaves of Bidens pilosa, soap and hot pepper as an insecticide for the control of leaf miners and other insects. The traditional application of Bidens pilosa in local medicine, especially for its antiseptic and anti-inflammatory properties, will remain of importance, the more so as the plants are readily available. The immunomodulatory, anti-inflammatory and especially antimalarial properties deserve further attention.