The peaceful (now extinct) Arawak Indians were the first inhabitants of the islands. The existence of their war like adversaries the Caribs made contant migration throughout the islands a necessity for these people. The island is still steeped in their ancient tradition.
Jamaica is a mountainous island of 4,244 square miles (10,991 square kilometers). The Blue Mountains in the east, composed in part of ancient volcanic rock, contain the island’s tallest peak at 7,402 feet (2,256 meters). The northern slopes of the Blue Mountains and the nearby John Crow Mountains are a completely uninhabited wilderness. Another unpopulated region is the Cockpit Country in the center of the island. A roadless jumble of limestone pinnacles and glades, the region is riddled with spectacular caves. In the west and along the coasts are savannahs, plains, and scattered trees. Most Jamaicans live on the coastal plains.

Jamaican Climate
The Jamaican climate is dry tropical, with temperatures higher along the coasts and cooler in the mountains. Rainfall, too, varies with region. Northeastern Jamaica receives more than 100 inches (250 centimeters) of rainfall annually–making it one of the wettest regions in the world. Most of the country experiences severe fluctuations of drought and flood. Little rain falls on the hot, dry southern and southwestern plains. The average annual temperature at Kingston, the capital, is 79o F (26o C).
Jamaica has about 120 rivers, most of which flow to the coast from the central mountain ranges. Those on the north side tend to be shorter and swifter than those on the south side.
Jamaica is blessed with several mineral springs, four of which are developed with facilities for bathing and/or accommodation. One is attached to the San Souci Lido Hotel and three are public, Bath in St. Thomas, Milk River in Clarendon and Rockfort in St. Andrew. The fresh water that flows out of the mountains of Jamaica is crystal clear, pure and cool. The quality of this water is what makes the island so magical and itâ€™s people so special and happy.
For centuries Jamaicans have exploited their island for mahogany and other cabinet woods, leaving little of the natural rain forest still standing. Erosion of the hill slopes is one serious consequence of this exploitation. But there is still a rich flora of native orchids and ferns. Throughout the year the many species of tropical and subtropical plants produce a changing spectacle of colors. Among the plants are the vivid red poinciana, the yellow poui, and the blue lignum vitae, which is Jamaica’s national tree. There are four major botanical gardens. Jamaica has more than 200 species of birds, including a beautiful hummingbird–known locally as the “doctor bird”–which is the national bird. Also abundant are bats, mongooses, frogs, lizards, and crocodiles. There are no venomous snakes on the island.

Jamaica has a population of 2.5 million. Kingston, the capital city, is the most densely populated with 750,000 persons. In the Northern Hemisphere, Kingston is the largest English speaking city south of Miami.

Jamaican Religion
A religious people, Jamaicans enjoy complete freedom of worship. Many Christian denominations are represented–the majority belonging to the Church of God–and there are small groups of Jews, Muslims, and Hindus. Two cults, Kumina (Revival) and Rastafarianism, have African links and are native to Jamaica. Rastafarians use ganja, a potent form of marijuana, as a sacrament and have special rules of dress, diet, and work. Jamaicans have developed a vibrant national culture, notably represented in such fields as reggae music, drama, and the visual arts and in the sport of cricket.
The majority of the population is Christian with small Jewish, Hindu, Muslim and Bahai communities. The older established churches are Anglican (Episcopalian), Baptist, Methodist, Roman Catholic, Adventists, Moravian and United Church (Presbyterian) and Congregational). The Pentecostals also have a large number of adherents. Many Jamaicans are members of indigenous religious groups e.g. Pocomania, Revivalism and Rastafari. Rastafari is a religious sect which believes in the divinity of Haile Sealassie, the late Emperor of Ethiopia.
Over ninety percent of the Jamaican population is of African descent. There has been much intermarriage among the races over the centuries and this is reflected in the diverse physical appearance of Jamaicans, and in their unique culture. The African heritage is still very strong. It is seen in the foods Jamaicans grow and eat (e.g. yam); in some religious practices; in music and dance; in folk tales, proverbs and aspects of the language.

Jamaica is one of the world’s major producers of bauxite and alumina, from which aluminum is made. Aluminum is not actually made in Jamaica, as the ore is shipped to smelters in the USA, Canada, Norway and other countries. Of all the minerals in Jamaica, alabaster and limestone. There are also significant deposits of agate.

It is not surprising that Tourism is Jamaica’s largest earner of foreign exchange and that there are over 1 million visitors each year. Jamaica offers year round tourism in Kingston, Montego Bay, Runaway Bay, Ocho Rios, Negril, Port Antonio and Mandeville and The Southwest Coast. It is an absolute paradise on earth. The beauty of this island cannot be over emphasised.

Jamaican Politics
Jamaica has two main political parties: The People’s National Party (PNP) and the Jamaica Labour Party (JLP). A third political party, the National Democratic Movement (NDM) was launched in 1995. The term of governance is five years, but the Prime Minister can call an election at any time within the term. The minimum voting age is 18.
The island is divided into 3 counties and 14 parishes. Each parish has a capital town which is the centre of local Government administration. 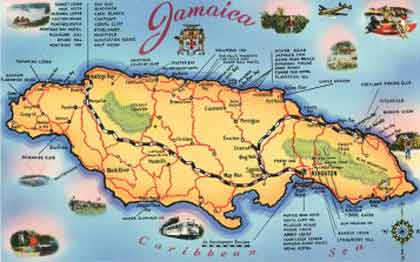