Ethiopia is a land-locked country in the ˜Horn of Africa’ to the northeast of the continent. Its topography is very diverse, encompassing mountains over 4 000 m above sea level, high plateaus, deep gorges cut by rivers and arid lowlands including the Dallol Depression, which is 110 m below sea level in the Afar.
Population in Ethiopia estimated in 2007 at 77 million.

The South Westerly Monsoon is one of the country’s three moisture-bearing wind systems. Originating from the South Atlantic, it brings the greatest amount of moisture during the main rainy season (May/June/September/October). The small rains (February-April/May) originate from the Indian Ocean and feed the southern and eastern highland areas. The third rainfall system also originates from the Indian Ocean, and feeds the southern half of the country any time between October and January, and March to May [2]. The mean annual rainfall is highest (above 2 700 mm) in the southwestern highlands, gradually decreasing to below 100 mm in the eastern lowlands of the Afar. The mean annual temperature ranges from a high of 35 °C in the Afar to 10 °C or lower in the highlands above 2 500 m [1]. From November to January in the highlands above 1 500 m, diurnal temperatures can range between below freezing at night, with frost, to over 25 °C during the day.

The country faces a number of environmental challenges resulting directly or indirectly from human activities, exacerbated by rapid population growth and the consequent increase in the exploitation of natural resources. Most serious of all is land degradation due to the removal of self-governance from local communities of smallholder farmers. The most visible physical impacts are the formation of gullies eating away the soil, the recovery of vegetation prevented by free-range grazing, and the unregulated felling of trees for firewood and other purposes.
These negative trends are now being reversed through the present government’s emphasis on the decentralization of power down to the wereda (district), the lowest level of official government intervention, and their constituent tabias in Tigray (kebeles in the rest of the country). Elected officials of the tabia run the day-to-day affairs of the local communities.
Food Crops and Diversity in Ethiopia
Traditional agricultural production is highly diverse and is the main source of food for the population. Two of the main staple crops, the cereal teff Eragrostis tef and the root crop enset Ensete ventricosa , are endemic, and many of the crops known to have their centres of origin in the fertile crescent of south-west Asia, for example durum wheat Triticum durum, now have their highest genetic diversity in Ethiopia. Ethiopia is one of the eight major centres for crop diversity in the world.
Other important crops with high genetic diversity in Ethiopia include the cereals, ”barley Hordeum vulgare , finger millet Eleusine coracana and sorghum Sorghum bicolour; pulses ”faba bean Vicia faba , field pea Pisum sativum including the endemic var. abyssinicum), chick pea Cicer arietinum ) and grass pea Lathyrus sativus ; oil crops”linseed Linum sativum, niger seed Guizotia abyssinca, safflower Carthamus tinctorius ) and sesame Sesamum indicum; and root crops”anchote Coccinia abyssinica, ˜Oromo or Wollaita dinich’ Plectranthus edulis, and yams Dioscorea>spp. Over 100 plant species used as crops have been identified in Ethiopia.

Agriculture accounts for more than 75 percent of total exports, over 85 percent of employment; and about 45 percent of the GDP (gross domestic product). Coffee alone makes up more than 87 percent of the total agricultural exports. Hides and skins are the next most important export items as raw, processed or manufactured goods.
Prior to 1995, Ethiopia had one of the lowest per capita uses of fertilizer in the world. Under SG-2000, farmers were allowed to select the crops they wanted to grow with fertilizer and use the best of their own local varieties rather than buy seed of HYVs; and it is only since 2003 that more widely adapted â€˜improved seeds’ have been promoted and taken up by smallholder farmers. But there are also efforts to promote the conservation and enhancement of farmers’ varieties (often called landraces) using organic principles.
In 2002, many farmers were heavily in debt and withdrew from the fertilizer schemes. Many parts of the country were also hit by a much shorter rainy season with the rains stopping early, or by drought. Consequently, yields declined, or crops failed completely and the government requested food aid for more than 14 million people, nearly a quarter of the total population.
In 1995, Dr Tewolde Berhan Gebre Egziabher, founder of the Institute for Sustainable Development (ISD), was asked by some government officials to design a project that could help farmers trying to eke out an existence on the highly degraded land of the highlands.The other partners in the project are Mekele University, the local communities and their local administration.
The project focuses on:
Improving biological and physical water and soil conservation in cropland including the control and rehabilitation of gullies.
Controlling, preferably stopping, free-range grazing to allow more grass, herbs and trees to grow.
Restoring soil fertility by making and using compost, and helping farmers avoid debt through paying for chemical fertilizer.
Incorporating grasses and fast growing legumes in areas treated for soil and water conservation.Since 2000, there has been a rapid scaling up of the project so that by 2006, ISD was following up project activities in 57 local communities in 12 of the 53 weredas in Tigray. Much effort has been made to include households headed by women in the project because these are generally among the poorest of the poor in their villages. 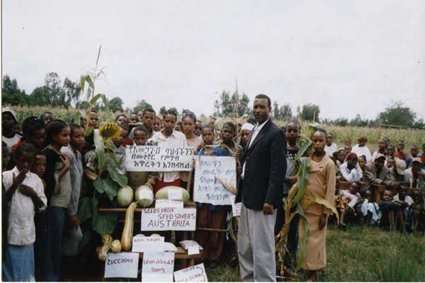 Since 2000, the BOARD has been promoting the land rehabilitation ˜package’ compost, trench bunding for soil and water conservation with planting multipurpose trees and grasses in over 90 communities within 25 weredas in the drier more degraded areas of the Region. By 2007, an estimated 25 percent of the farming population in Tigray were using this package, particularly making and using compost.
This is now the single largest study of its kind in the world comparing yields from the application of compost and chemical fertilizer in farmers’ fields. The results show without any doubt that compost can replace chemical fertilizers and increase yields by more than 30 percent on average.
Soon, farmers began to observe and appreciate the residual effect of compost in maintaining soil fertility for two or more years. They are thus able to rotate the application of compost on their fields and do not have to make enough to apply to all their cultivated land each year.
Difficult weeds, such as Ethiopian wild oats Avena vaviloviana, have been reduced, and crops show improved resistance to pests such as teff shoot fly.

Farmers who make and use compost are able to avoid the financial risk of taking chemical fertilizer on credit, and the compost is available when it is needed; chemical fertilizer is sometimes delivered too late for the farmers to use. The most visible impact of farmers not having to take fertilizer on credit is that they often invest in improving their homes and compounds, for example, replacing thatching with more water-proof corrugated iron sheets, and/or diversifying their production base by keeping beehives.

Composted fields are able to retain more moisture than untreated fields or those treated with chemical fertilizer, so that when there are dry periods, composted crops continue to grow. This was seen dramatically in 2002 when the main rains were very poor and stopped early. Crops in composted fields were still green when those in check and especially chemically fertilized fields had withered and died.

The women say that food made from grain harvested from composted fields have better flavour and provide a more satisfying and sustaining meal for their families than grain from fields treated with chemical fertilizers.
Once farmers appreciate the improved productivity of composting, they usually start to re-establish the diversity of crops, particularly cereals and pulses familiar to them before their land became highly degraded. Many farmers have also started to plant fruit trees, both around their homesteads and in rehabilitated gullies. Women farmers are particularly adept at taking care of these fruit trees, such as citron Citrus medica and papaya, and they are now also starting to grow mulberry and castor Ricinus communis to raise silkworms because there is an emerging market for the silk.
In Adi Nifas, where the main gullies and hillside were treated with check dams at the start of the project, the streams from the hillside used to dry up quickly in the dry season. Now these streams hold water all year round.
The use of compost to restore soil fertility can go a long way towards combating poverty and ensuring food security for smallholder farmers who typically cultivate less than one hectare of land. Through indirect discussions, it appears that most of these farming families have at least sufficient food grains stored in their houses to feed their families for the whole year, and some have larger stores.
The experience with the farmers in Tigray in producing and using compost shows that the aim for Ethiopia to have a substantial number of farmers producing organically can be realized. It also shows that the introduction of ecologically sound organic principles can have very rapid positive impacts on the productivity and well-being of smallholder farmers because they do not have to go through a conversion period of reduced yields as they go into using compost. Most farmers, particularly those in marginal areas, are not able to afford external inputs, so for them an organic production management system offers a real and affordable means to break out of poverty and delivering food security.
The organic movement is gathering momentum in Ethiopia and it is unstoppable.
By 2007, there were four international organic inspection and certification bodies in Ethiopia, all with local Ethiopian experts. The certified organic products being exported are all high value products: coffee, honey, sesame, pulses, teff, pineapple, bananas, linseed, spices and herbs from farmers’ fields, and incense and myrrh collected from the wild.
There is also an expanding awareness of the importance of producing healthy fruits and vegetables for the educated middle-class and expatriate market in Addis Ababa. For example, Genesis Farm, started in 2001, now produces high quality organically grown vegetables on an area of 40 ha. The vegetable farm has 302 permanent workers and 52 daily labourers. The farm also has a dairy herd of 110 cows and 50 000 chickens, not totally organic by European standards, but much healthier than most other animal production enterprises of a similar size in Ethiopia. There is a high demand for the products of the farm, which supplies hotels and supermarkets in Addis Ababa, as well as having its own shop on the farm. What is very interesting to note is that the prices of the products in the shop on the farm are generally the same or even somewhat cheaper than their equivalents from non-organic production units around Addis Ababa.
Farming like the Rastafarians have always farmed is bringing benefit to all Ethiopia, the rest of world can follow too.