Future Seed is the latest breathtaking sculpture with biblical connotations from the Zimbabweean sculptural genius, Chenjerai Mutasa. It is seen as something of a landmark. 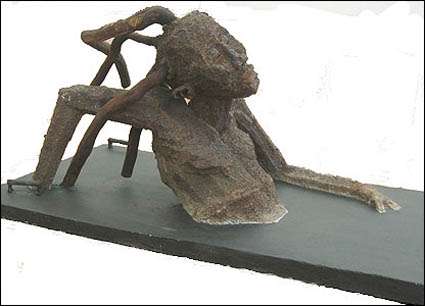 It is a five-piece work, which begins with a simple granite grave and follows the resurrection of a Rastafarian man.

“Its a big move from where we have been in the past with static, compact works. This is a work in progression, says Ms Sibanda. She says this work speaks of interaction between the living and the dead, a current theme in Zimbabwe.
This group of artists is very inspired by spiritual ideas, a combination of Rastafarian and traditional African.

In his book “The Alchemist” Brazilian author Paulo Coelho writes, “it’s the simple things in life that are the most extra-ordinary, only wise men are able to understand them.” Chenjerai Collin Mutasa and Mambakwedza Mutasa are brothers who have taken scrap metal, used glass, bamboo and various found objects amongst other things and turned them into well crafted sculptures and hanging constructions which have found their way to the National Gallery of Zimbabwe in Harare.

Baraka is a Swahili word meaning a Blessing or a gift. The Myth behind the Baraka is that if the blessing or gift is abused, it can cause great suffering, and if it is taken care of and respected, brings great wonders and joy.

The Baraka – Blessings of Life, an exhibition of sculptures and hanging constructions opened on February 3, 2004 at the National Gallery of Zimbabwe in Harare. The Mutasa brothers said the main aim of the exhibition is to re-awaken human values and to save souls. The Mutasa brothers have taken what society views as junk and turned it into what wise men call “beautiful art”.
The Mutasa brothers are based in the Hatfield suburb in Harare, where their home is oftenly scattered with collected objects that include old car parts, sheets of metal and pieces of wood that are waiting to be created into art.
The Mutasa brothers have conducted workshops and exhibited their works in various coutnries which include the United States, Netherlands, Canada and Kenya to mention but a few. They have also won numerous local and international awards and grants for their magnificent work.

Thankyou to www.kubatana.net for some of this information.

One thought on “Future Seed A Prophetic Rastafarian Sculpture”